The Creek is close to the perfect running AO. There is a fairly well-lit, half-mile sidewalk trail that rings a picturesque pond, and wide running/biking paths that are set off from the main road a bit. Truly, almost perfect.

Except for the DAMN GEESE. Either these animals are as dumb as squirrels or as stubborn as mules, but the approximately 10,000 of them that seem to call The Creek home just WILL NOT MOVE. Wouldn’t you move if something 10 times your size came barreling up on you, huffing and puffing and wheezing and groaning? Of course you would, especially if you had WINGS. Not these buggers. They just sit there and look at you with what is either that dumb goose look or a look of complete disdain for your very existence.

So it was less than surprising that YHC suffered a bird strike event. This one stupid, stupid goose waited until I was…oh, I don’t know…maybe ONE FOOT AWAY before deciding to cross right in front of me. In flight. I broadsided him, taking his wing and stupid bird body right to the chest. I’d say I showed him who’s boss but I know that’s not the case. He just rejoined his dumb bird friends and began plotting further mayhem. 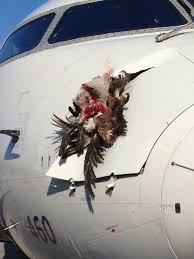 Bird Strike: Dangerous for both airplanes and runners. Apparently.

Stretch, then head over to the trail by the pond. Complete the following x3:

Once each PAX completed three circuits we lined up for a race-pace run to the light post across the pond from us. Lining up in reverse order of finish (last to finish lines up first), the rabbit of the group (T-claps to Wiper) sends the PAX off at 5-second intervals to return to the start point. Goal is to catch as many PAX in front of you as possible.

Don’t let the fitness levels of others get in the way of your fitness journey. Competition is healthy and it’s good to have stronger/faster men to benchmark, but ultimately it’s you vs. you. Too many men get discouraged and fall into the trap of “I’ll never be as fast/strong/capable as so-and-so, so why even bother?” You bother because you’re getting better. Keep at it.