This workout came out of a conversation YHC had with Canoli expressing his passion for a healthy lifestyle and wanting to share that with others.  Having lived a very unhealthy 1st half of YHC’s life and seeing the effects it has had on his parents lives and how they were never able to live their lives because of the choices they made, YHC tries to always share healthy and practical tips with those around him.

Shortcake Special (Before the BC): Too Much & Picasso 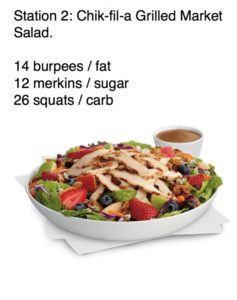 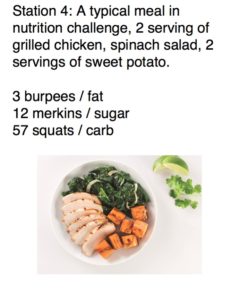 Led by the PAX as each shared their own struggles and downfalls followed by encouragement for one another!

YHC started this workout with some personal history about his own family.  Growing up where food was a form of “love” it is no wonder he found himself at 255 lbs with a 44″ waist by the time he graduated high school.  Soon after he then realized that this was no way to “live” and subsequently made small changes that resulted in a 95 lb weight loss but quickly realized that even that wasn’t healthy and would require more than just starving oneself.  Once figuring out the formula to success with a healthy lifestyle, YHC then proceeded to share this with his own parents but they never took heed to his warnings and have subsequently fallen into the statistics that is obesity.  YHC’s mother is bordering on 500 lbs and has spent the past 2 years (beginning at the age of 65) in a nursing facility as she is bed ridden and can not take care of herself because of her unwillingness to make small and simple changes.  YHC has long since resolved with himself that he can not make others change but will still share his story in hopes that others will take heed and set themselves and their families on a healthier course in life!

Once completed with YHC’s story we then proceeded into what a typical on the go meal looks like, it’s easy but the burpees that come with it aren’t!  44 burpees will make one think twice or even thrice about eating it!  Of course the PAX was not happy to hear this but we completed it all together, on Q.  After the first set of Burpees, Merkins and Squats we took a water break and gained a bit of wisdom from Major Dad.  “We too have to look at what examples we are to our kids, as they get older and start to make decisions on their own we need to be sure and steer them to those health decisions both by words and deeds”… AYE! Major!

From there the next 3 stations were preceded by a lap around the track and weren’t as severe as the 1st pain station but the idea was brought to the forefront of each of the PAX’s that we have decisions everyday that affect us and we must choose to do the harder thing!

YHC was humbled to have had the opportunity to stand before you all and lead.  I certainly encourage you all to reach out to those around you and help pass on the gift of a healthy lifestyle!