Warm-up: 2 times around the pond

Devo: Horatio Spafford was a rich land owner in Chicago in the 1860s. He was a devout Christian, and had a wife and 5 children. He also owned a lot of land along Lake Michigan. The Great Chicago fire wiped out a lot of his land. Around the same time his son died of Scarlet fever. After a year, he decided to take his family to England for a vacation to help counter the tragedy they dealt with. At the last minute Horatio stayed back for business, but sent his wife and 4 daughters on. The boat they were on was hit and sank. All 4 daughters died. His wife sent him a note telling him. He immediately set sail for England. When he arrived to the point where the other ship sank, he looked out at the waters and was inspired to write the words for It is Well with My Soul:

He had the reassurance of God’s plan that he and his family would be together again. How strong is your faith and relationship with God?

Moleskin: It’s always a fine line of getting in miles and staying engaged at the running AOs. I’ve been leaning toward less miles and more competition/engaging in the run lately.  Both of these activities need a little tweaking, but I think they may show up at Tremor. I liked that it took your mind off of the running, but also forced you to speed up and slow down based on the needs at that time. 2.5 miles in 45 minutes isn’t a lot, but unlike what Cake suggests, it’s not always about “going the distance.” On a positive note, the geese heard we were coming and only a small gaggle were there. When the men came a running, they got out of the way. Take that lower species! No one is watching War for the Planet of the Geese. Humans took back the AO. Humans. Win. 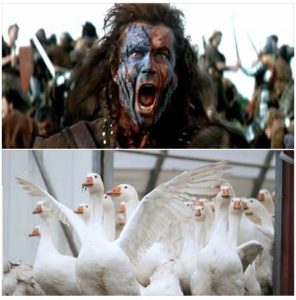