The Thing: This is Tremor and we run. We ran up Jingle’s Hill to Main Street, then went to Dunkin Donuts. We had at least 1 regular donut and ran back. Total route was about 3.1 miles.

Moleskin: Tell some guys you’ll buy them a donut and they come out of the wood works! This route was thought up long ago, and no one every did it, so YHC stepped up and took action. The goal was to beat your time on the way back. I’m not sure if that happened, but we had fun. Everyone ate at least one donut. Recount ate two and Dunkin and I split an extra one. T-Claps to Myrtle for pitching in a $2 off coupon. Also, thanks to Dunkin for making it out to the Dunkin “sponsored” run. Your appearance check is in the mail. As AO Q, I think this will be a quarterly run, so be on the look out for the next running of….THE DUNKIN DONUT DASH! 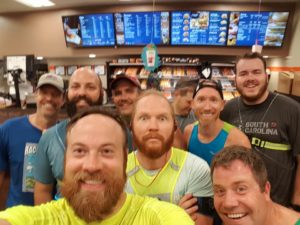