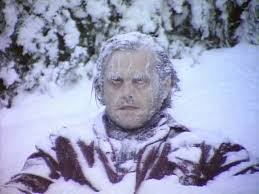 COP: shift your feet back & forth a lot, maybe hop a little, rub your arms, high knees, run your mouth…anything to kinda warm up and keep your brain off of the bitter cold.

The Thang: I don’t like to brag (much), but I once again implemented my special, secret, unbelievably involved thousands of steps plan that was individualized to each PAX. Not 2 PAX had the same amount of steps as the other. Mind blowing, man. Far out.

Mary: Even though we transferred temporarily to the Harris Teeter on Bacons (mmm…bacon) Bridge, still no Mary working. One of these days we might actually have a Mary sighting at The Creamer.

Pledge and COT: accomplished in 2 small groups…I’ll probably explain that in the Moleskin.

Moleskin: So…the roads were still jacked up, the weather was all jacked up, Nexton was especially jacked up, so The Creamer was kinda jacked up, as well. We couldn’t safely be at our home, so Floppy and YHC did some Saturday evening recon of the streets surrounding the HT and decided it was probably the best location to attempt a Creamer and keep everyone as safe as possible getting to/from and safe while running. We had several splinter cells (no, not you Delbert) of runners go in slightly different directions and distances ranging from 3.1 miles to 12+. Not only was all of that previous stuff jacked up, but the HT Starbucks jacked up our plans, as well. I confirmed, IN PERSON with HT management that the Starbucks would be open at 6AM the morning of The Creamer. Of course…it wasn’t. Reynolds showed up to TRY and 2nd Eff up his Sunday morning, but due to Starbucks’ non-opening he had to head on to work as the rest of us headed for Waffle House (sort of). Floppy & YHC stopped in for a pit stop/Cannoli stop  at HT (for 1 of us, ha) and then went back out for another 5-ish miles (what the heck is wrong with us?). So, by the time we made it to the Awful Waffle (I actually like WH) 1 group was leaving. We said a pledge and then headed in to shoot the breeze for a few minutes with the remaining PAX. Another pledge was said as the rest of us left.

With all of the jacked up stuff…it was still pretty amazingly awesome to have 9 of us out there running in such cold, frozen and sketchy conditions! We definitely missed our home, but it was a nice change of pace and the 2nd F was still very strong. In fact…be on the lookout for an occasional traveling Creamer Field Trip. Next field trip will probably be a Bridge Run. Boom! Keep on truckin’, Creamers!