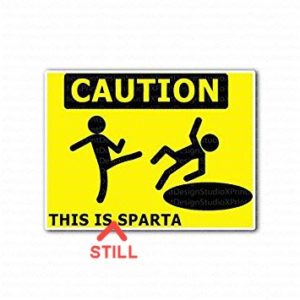 FNGs: none. Disclaimer given anyways.

Good effort from everyone today. Gandhi had to hand off the Q last night due to illness, so YHC decided to try a few more new things today that were leftover from the Saturday workout plan. (Ran out of time to attempt them all on Saturday.) These were challenging! The squat + air chair combo during the last round of Lazy Doras was especially brutal, I don’t think anyone (YHC included) was able to hold the chair position the entire time. Also, the Tunnel of Love was fun but difficult; we got into a rhythm of all 6 pax crawling through, taking a couple seconds as a group to breathe, then start again. As hard as it was with 6 Pax, it would have been *really* challenging with a larger group like 15 Pax, since you’d have much less time to rest/cheat due to constantly have someone crawling under you. It’s a good exercise for forcing you to hold plank/downward dog for a long time! (Shoulders start to burn.) As an added “bonus,” we caught up with the sprinklers for the second half of the field, so were crawling through soggy ground the last 50 yards. Fun times.

Quotes of the day: