The Thang: Run, ruck, walk, bike, whatever flows your boat.

Moleskin: A few of us showed up at 0400 and were greeted by a police car at Carolina Ale House. Once he drove off, another car came speeding in the parking lot. What happened next was absolutely insane. A very big gentlemen (yeah right!) proceeded to attack his girlfriend’s (at the time – I would hope she’s not with that d-bag anymore) SUV by beating on the passenger window, hopping on the top of it, holding the passenger side door handle while his girlfriend was driving away and even faking being ran over to get her to unlock the door. When this happened, she rolled down the passenger window and all of a sudden he was miraculously cured! He proceeded to open the door and get in the passenger side seat while she ditched the car and got out (with it still running!). The car went through the intersection when he got over to the driver side, popped a U-Turn back towards Carolina Ale House and made a quick right in an attempt to outrun the police that had just showed up. This guy was an absolute jack@$$ and from what we were told has also beat on his girlfriend (maybe ex by this point) on numerous occasions. He was apprehended shortly thereafter and we proceeded to give the police a statement. This is where the picture below comes into it. While Professor Klump was giving his play-by-play, he turns to mention that I pulled into the parking lot and says “What’s your real name?”. I chuckled, as did Old Flame, and didn’t even bother to explain. If you are not F3, the names will mean nothing and sound stupid. If you are F3, we all know how important a name is – regardless of how dumb it may sound.

All in all, it’s safe to say that whenever and wherever you are running, it in important to be aware of your surroundings and always expect the unexpected. Also, this plays into to hoping for a speedy recovery for Professor Klump as he took a spill going over the I26 bridge on some uneven pavement.

It was great to see the numbers back in the high teens (16 not 15 as I mentioned after). Let’s keep the numbers up! 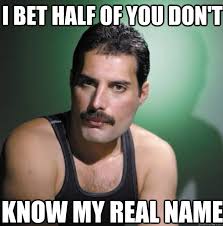