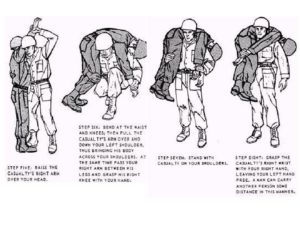 Moleskin:   Good work from everyone today. It was hot. And a fireman carry across the entire football field was more grueling than YHC anticipated. This is definitely a learned skill and Cisco was much better at it than YHC, but doing it ten times helped. Cisco said his expertise came from lots of wrestling with his boys at home. Soon YHC will have similar opportunities for practice. 🙂