15 dudes chose the harder thing, taking to the mean streets of downtown Summerville for some hot Beast-on-Beast action, brought to us all by the letter B. 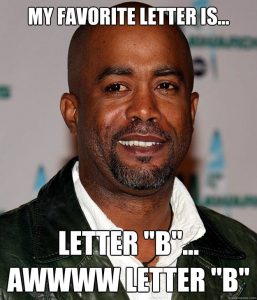 “And if the sun comes up tomorrow…..”

Conditions: Humid. Summer is upon us.

Leave the AO immediately following the disclaimer and head to the parking garage (The Concrete Beast). Take the steps to the top, where Pretzel’s special block (also known as the Beast) was waiting. Pair off with a Buddy. Buddy 1 heads to the bottom via the stairs, then begins running back up by circling the levels of the garage. Buddy 2 begins to descend the garage either by Bear Crawl, Broad Jump, or Blue Crab Walk (I needed a B). Once the Buddies meet, do 10 merkins together, then switch roles so that the runner going up is now doing the Bear Crawl/Broad Jump/Blue Crab Walk going down, and vice versa. Once the runner reaches the very top, stop and do 10 Overhead Press with the Beast before heading back down the stairs to begin running from the bottom again. Repeato until Q calls time.

On the return, we got stopped by – as David Allan Coe might have described it – a danged ol’ train. A danged ol’ LONG train. So we did Flutter Kicks, LBCs and Burpees while we waited. As a result we were two minutes late getting back to the AO, a fact that Probie did not let escape YHC’s attention.

Devo: We all go through ups and downs. We all have times where it feels like our walls are falling in around us. That’s not the time to withdraw into our shells. Don’t fall away from the group in those times. From personal experience, in my toughest days at work a couple of years ago, F3 was one of the few islands of peace and sanity I had. The third F, Faith, isn’t about Christian faith or even religious faith. It’s about faith in the fact that you’re part of something bigger than you, and that no man survives on his own island.