FNGs: None- disclaimer given anyways

Note: All moseys were done at a brisk 11 min/mile pace (with rucks, of course)

“There is a type of self-confidence and self-esteem that is healthy and good. But there is an excessive self-confidence that is very harmful to one’s spiritual health. How do you tell the difference between the two? Easy. A wrong self-confidence is usually characterized by prayerlessness. We’re so busy instituting our plan and following our instincts and leading, and we are so confident it will all work out as we have planned, that we never bother to look up. It’s not that we are going against God, it’s just that we don’t have a sense that we really need to depend on Him. We think we can handle things without bothering the Lord.

In John 15:5 Jesus said, “I am the vine, you are the branches; he who abides in Me, and I in him, he bears much fruit; for apart from Me you can do nothing.” The person with excessive self-confidence really doesn’t believe that last phrase. He may believe it intellectually, but he doesn’t believe it experientially.”

Do not discredit the power of prayer. Pray when things are tough and when they are going well, when you face a tough decision, or just as you go through normal life.

Moleskin:   Mañana was hiding in the shadows to scare the FIA runners and later came across a bunch of balloons that reminded the PAX of IT (YHC thought they were from UP…to each his own I guess). HC’s mean nothing to Wreck-It-Ralph. First he was asking for a ride so he could ruck to the country club, then changed his HC to include a modest 2-3 mile SCS, then said something about tacos and didn’t show up at all. 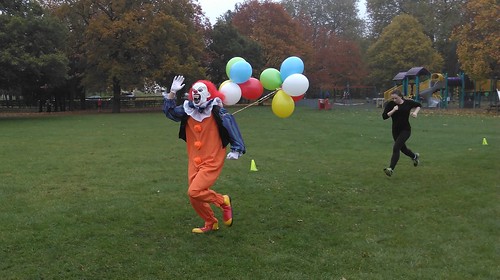