YHC explained the new rule of this BC, DO NOT RECOVER TO YOUR FEET UNTIL YOU ARE TOLD TO DO SO

Bear Crawl to sidewalk for Merkins on Q x5

Bear crawl back to tree line for  round 2

Each round is the same exercises and modes of transportations except increase reps by 5 each round until we reached 25 reps and bear crawled back to tree line AND STAY DOWN!!!

Bear crawl into formation for Tunnel of Love to side walk the bear crawl to oyster tables for pull ups, AND STAY DOWN!!!

Pull ups, one set AMRAP until smoked.  Now you can recover to your feet just long enough to walk over to the circle and get on your six for MARY.

Devo: We have all been low but when you are down you feel like you are the only one.  YHC sees people all day long who are down and depressed who feel like they are all alone.  Then the next man or woman comes and feels the same way, and then the next, and then the next.  You are not alone.  We all have felt it or will.  Reach out and/or do something that matters to you and I promise you, it will pass.

Moleskin:   This BC was friggin awesome in so many sucky (and some not sucky) ways.  Not only did Cheech return after a minor hiatus but he and Major Dad busted out a Shortcake Special.  Speaking of Shortcake, that dude owes YHC some burpees, I’ll let Picasso decide how many.  Speaking of Picasso he and Defib rucked this mother.  This BC was 35 minutes of heavy sweating all operating below the beltline (if my girlfriend in high school, now my wife, only put in that kind of effort she might have a bigger ring on her finger).  Now, a couple men modified and did some lunges but many stayed down the entire time.  Unless you were there it is hard to capture the suck level of not standing until it is time for Mary.  Tectonic was freshly mowed so YHC’s shower looked liked someone emptied a lawnmower bag in it.  11 is a good solid showing for a Monday morning and the PAX was badass.  Trust me if you feel like coming out to Tectonic to Q you can throw whatever the fuck you want at these men and they will eat it for breakfast and thank you for it.  Strong damn work!!!

Pair into battle buddies and head out to storage barn.  Each pax grabs one block, and one brick apiece.

Station 5: 50 of each of the following; LBC, 4ct flutter kicks, Freddie Mercurys, LBC with bricks on chest, Flutter kicks with block held above chest.

Moleskins: T-claps to all who posted – especially FNG Sef – Hawkeye!  Thanks for being a part of the beta test of my new workout.

The thang: grab a partner and a sandbag- one runs while other does reps

100 sandbag shoulder presses(Omaha here as with weak sandbags had to take out an exercise, so the same number of reps twice)

(A bit of mumble chatter about too many reps/me not really thinking this through, but we got all of em done)

Bom : prayers for Air Cooled after his heart attack and surgery 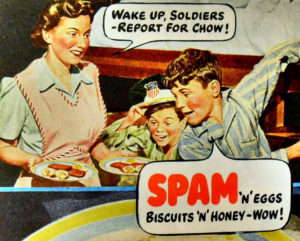 Conditions: 79 and HUMID as HELL

The Thang: SPAM (Pax retrieved 2 blocks each and reported to the front of the club house. Once there they partnered up. While one Pax performed their exercise the other farmers carried his blocks about 4o yards and back. Then they switched.

2 servings of Spam were served:

Pax then ran a cool down lap around the Bermuda Triangle and reported back to the front of the Club House to retrieve one block. and report to the first of 8 cones for suicides.

Suicides- Cusack Block to the next cone in sequence and normal carry it back to the start. The further you go out the more that Cusack kills you!

This was all we had time for. We had to Farmers Carry the blocks back to be stowed. That last bit was a real ass kicker.

Mary: She had the day off!

Moleskin:   Four men beat the July 4th hangover to celebrate Spams 80th birthday. The mumble chatter was minimal. Well except for Bob the Builder but whats new? The more he is getting his can kicked the more he talks. LOL!

Grab a block and 2 bricks a piece and meet back at front of circle.  Mosey over to picnic tables and do step ups up and over all tables.  Mosey back to front of circle.  Break into 2 columns.  Faster guys in the front and slower guys in the back.  Jailbreak to street light before the no parking sign and back.  Pick up block and do 20 curls for the girls, 15 overhead presses, 10 squats and 5 block merkins.  Separate into two rows and jailbreak again to same spot. Mosey to sand volleyball courts and do bear crawls through the short side of the court and back.  Mosey back to block.  Do 20 LBC IC, 15 squats on Q, 10 flutter kicks IC, and 5 merkins on your on.  Jailbreak to same spot again.  Mosey back to picnic tables and do another set of step ups up and over all tables and mosey back.  Pick up the bricks and do 20 curls for the girls IC, 15 front raises and, 10 side raises and 5 brick merkins.  Separate into 2 columns. Another jail break but this time we raced the man next to us.  Pays to be a winner.  Loser had to do 5 burpees while winner planked.  Mosey back to blocks and did waterfall merkins.  PAX did 5 merkins and on final merkin stayed in a low plank and held it as long as possible.  Lined up in the order of failure.  Repeated but this time you had to hold until the man to your left failed.  Stowed blocks and brick

Devo: DEUTERONOMY 20:1  Keep God on your side to tackle tomorrow.  don’t let challenges from today affect your tomorrow

Moleskin:   YHC received some grief when describing the waterfall pushups.  Saying “go down on me” was not the best method.  As always Chum provided the laughter the pickle pounders as usual.  Big thanks to Chum for assisting me in my VQ!

Intro: When it feels tough. You’re doing it right.

4 links right arm up left arm by your side.

Announcements; Pledge of Allegiance; BOM
Moleskin: Great push by the Pax and many continue to make great improvements but where is Canadian Bacon continues to be a trend.

Moleskin – The Pax kept moving through the rounds and we completed all sets in time for the last mile run. Tclaps to all.

-Jailbreak to cage
-Partner up, grab 1 block and 2 bricks per pair, then head back to pits

Round 1
-1 guy does merkins on block while other guy lunges down sidewalk and then runs lap; then switch it up

Round 2
-1 guy does squats with block while other guy bear crawls down sidewalk and then runs lap; then switch it up

Round 3
-1 guy does shoulder presses with bricks while other guy crab walks down sidewalk and then runs lap; then switch it up

Round 4
-1 guy does curls for girls with block while other guy skips down sidewalk and then runs lap; then switch it up

-stow blocks/bricks and return to flag

Moleskin:   It was a hot and muggy evening but  not nearly as bad as it could have been for late June. Original plan was for 4 rounds but squeezed out an extra round in lieu of Mary. Great push gents.

Preamble:  The Creek is F3 Summerville/Goose Creek’s Monday Wednesday Group Run AO.  We meet at Goose Creek City Hall at 0500.  Get out here and get you some of them sweet, sweet miles!

COP:  Stretch it out and listen up.  I got a plan.

YHC has been hurting a little bit lately (yeah yeah, I know, I sound like a dadgum whiny baby….  no more of that).  So I thought to myself, “Snowden, you’ve got a ruck.  You’re pounding yourself with this running while you’re trying to recover, why not change it up and put on that ruck? it’s not just a laptop bag…  Nothing like a little extra weight on your back to encourage the healing process, AND you’ve got a couple guys out there who are consistent posters who get out and put miles in at your AO, why would you NOT want to put in some work alongside these men!?”

I have lengthy internal dialogs.  I even bore myself.

So I put a little ruck vs run challenge together.

Runners, follow path B.  A roughly 3.75 mile loop that returns to the AO.

Everyone in your group must finish together.  Don’t dilly-dally, get it done!

What?!?, McFly and Splinter took off in the run group.  I figured all three of them were pretty decent runners and it was pretty likely they’d average in the 8’s which meant we’d have to finish our 2.8 in around 35 minutes to have a shot.  Brisk pace for a ruck… like 12.5 min/miles.  That was probably a little too aggressive.  Because the rucks got passed with about 2/3 of a mile left to go.  Maybe I’ll make the runners do an extra half mile lap around the AO next time.  Yeah……   Nevertheless our ruck group averaged in the 13’s and we would’ve won if not for those speedy kids and their fancy running shoes.

The runners went for an extra lap while us ruckers moseyed back.  We did a good amount of shuffling to keep up and it wore me out.  YHC had a 20lb plate on his back.  Stringbean and Humpday had 30lbs.  I don’t ruck much, and it wore me out.  I respect the training these guys put in.  Not to mention the 10 miles Stringbean did a couple nights ago.

Devo:  On the importance of hard work and the limits of where raw talent will take you.  There are plenty of cases of people that coulda been this or that and never live up to their potential.  Hard work is the great equalizer and we can’t work hard at everything.  Choose wisely.

Moleskin:   Q’ing a run group when you can’t run forces a little creativity.  I’m grateful for the guys who come out and ruck consistently.  I appreciate the opportunity to put in some hard work in a different way.  I’ll tell you what, I have NEVER been that tired after a run.  I dozed off in my car when I got to work.  That’s a beatdown of a different type!

Moleskins: T-claps to all the non-vag bags who posted!  The Murph is never fun but it gets you stronger.  T-claps to Recount for winning the Tomahawk challenge at Seismic last month – Awarded by Goose this morning.