Conditions: Little chill in the air but nothing we couldn’t warm up from

COP:  10 TTT IC (low and slow to get a good stretch on the hamstrings); 20 SSH IC.  Sakrete Shuffle (Run around the track going up and down each bleacher as you get to them)

Continue this until 0530 when cars starting coming into the parking lot.  Safety first.  Lunge walk back down ramp and across track.  Gather back at flag.

Dora:  Pair up.  One person does one of the six previous exercises.  One person runs around the track.  When person 1 returns the second person begins running.  Both partners must do same exercise.  At 0544 return to flag.

Devo: YHC did not have a devo planned but boy did Splinter.  Sometimes in life we are just forced to be quiet and let the smarter ones speak

We as men tend to recluse ourselves when going through tough times, depression or other struggles. We go dark and sometimes never recover from it fully, if at all. Remember that reaching out and sharing your burdens is how we are meant to live. We can’t carry struggles alone, but when you reach out to a brother that burden becomes easier to carry. For these same reasons we as men need to be more self aware and recognize when one of our own are silent…odds are they need you.

Moleskin:   I have a special place in my heart for The Jones.  I was there for the launch.  I was there during the beginning weeks.  I was the founder of the BJDD (Bedrock Jones Double Down).  I even recruited a couple crazies to do that with me.   After being named AO Q of Bedrock my participation at the Jones decreased.  Then became almost non existent when my wife got pregnant and then had our little girl.  I like the 0500 start time.  It has killed the BJDD essentially but I think more guys will be able to get down there and then get back for work and what not on the other side of town.  I highly encourage you guys to make a trip down.  Its a wonderful AO with a ton of opportunities.  They have showers on site.  It was a pleasure to be back in the middle of the circle with these men!  Thanks for letting me lead! 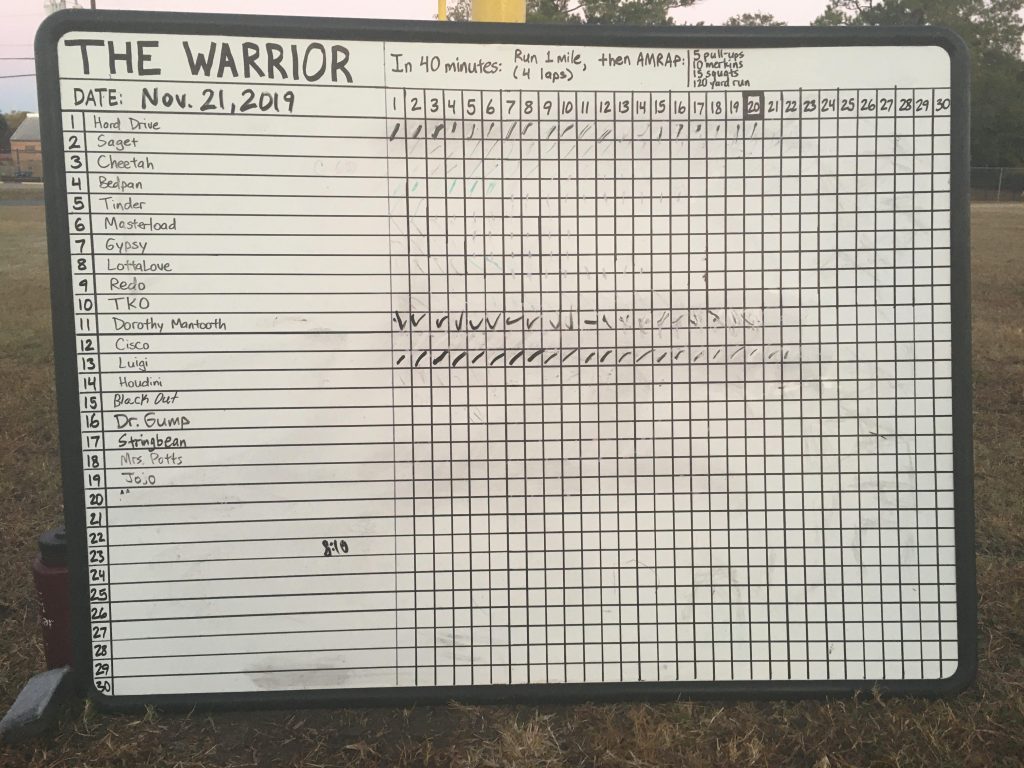 We did our monthly fitness test, The Warrior. See the August 2018 backblast for details on the test and how it’s scored.

Doing the Dora with 3 is always a mathematical conundrum, but with Hard Drives math skills and DMT’s inability to count past 50 this made for a fun three way Dora. We started off with two PAX running 50m while the other counted, then the other PAX did the same with an imaginary friend.

Announcements: There’s a new “unofficial” workout at The Jones starting at 0500, it’s called running. String Bean is leading the effort. String Bean was the only PAX for that one today, he ran as promised. HBB is still recovering from his 100k mosey this weekend. Good work HBB! So get out of your fart sack on Tuesdays and Thursdays for a double down at The Jones!

Devo: thanks to LoL

“A man is not old until his regrets take the place of his dreams.”

Moleskin: the fart sack was mighty tempting this morning, not gonna lie. But glad we showed up for some good mumble chatter during our “breaks” aka running. LoL forgot his gloves, to remedy that he ran home and brought back a pack that he’s been saving for a rainy day. Mr. Hard Drive has also been cristened as an official F3 Q by Mr. LoL himself, one of our OG AO Qs. DMT is glad he didn’t let the fart sack win for this reason alone.

Wanted to get the guys sweating early, and give us a good chance at having some mumble chatter since we don’t get to post with Cheetah that often. Got 4 big blocks and 4 bricks out of the shed and set them up in the “Wheel of Misfortune” (WoMf) formation. The WoMf is one of Cisco’s creations. Imagine the big blocks in a circle, each PAX in between each big block. Small brick on top of big blocks. IC you reach to your left with your right hand, grab the brick and move it to the block to your right, then do a merkin, that’s one. We did a one lap mosey then did the following, and kept doing laps in between the fun below:

We ended up with 2.25 miles at the end of the workout.

Announcements: There’s a new workout at The Jones starting at 0500, it’s called running. String Bean is leading the effort, so far him and Honey Boo Boo have made it every morning since it started. We’re going to need a good name for it soon, we’ve come up with some good options, but are open to other suggestions!  So get out of your fart sack on Tuesdays and Thursdays for a double down at The Jones!

Devo: Humility – Thanks Hard Drive for this! It sparked some great convo during our laps. Some good words to live by:

Moleskin: We ended up being able to donate about 10 bags full of clothing to LOR this past Thursday. BIG thanks to Accelerator for wanting to team up with The Jones to donate. Here’s a pic of DMT with the Director of LOR of our donations.

Announcements: There’s a new workout at The Jones starting at 0500, it’s called running. String Bean is leading the effort. We ran for 45 minutes with a poop break for DMT. So get out of your fart sack on Tuesdays and Thursdays for a double down at The Jones!

In the same way, let your light shine before others, so that they may see your good works and give glory to your Father who is in heaven.

Moleskin: together we got about 4.5 miles in, total String Bean got over 6 because he just loves running that much. Keep Mr. Honey Boo Boo in your thoughts this weekend as he’s tackling a 100K race this weekend. We spent our miles talking about our upbringings, and how it’s important to not be a dick to other people. We all agreed it was more fun being nice, than being, a dick.

Did most of the things that were done, however not in this exact order

Announcements: There’s a new workout at The Jones starting at 0500, it’s called running. String Bean is leading the effort. String Bean and Honey Boo Boo were at it again this morning and they even let me set the pace today! Lots of other running events going on in the area in the next few months, check out past BBs to find more details!

Accelerator and The Jones are teaming up to donate some materials to the LOR All you need to do to participate is gather your unwanted shoes/clothes (or go the extra mile and buy some of the items listed in the link) and give it to Cheetah, DMT, or anyone planning on DD’ing at The Jones on 31OCT2o19 – Cheetah and DMT are going to deliver the goodness that morning. If you want to be super BA, come DD at The Jones and bring your donations in person!

Moleskin: HYC still has to get his body clock set right for the DD at The Jones. Luckily, String Bean helped DMT kill a turtle head that spawned towards the end of our run. The workout Tuesday was so awesome DMT would have done a great disservice to the attending PAX by not recycling it and sharing it with them. LOVE working the circuits and being able to mumble chatter in between with a 1/4 mile “rest”.

Announcements: There’s a new workout at The Jones starting at 0500, it’s called running. String Bean is leading the effort. String Bean and Honey Boo Boo were at it again this morning, come join us!

Moleskin: Got to catch up with String Bean and give him a shed key this morning. Honey Boo Boo and him ran more laps, discussed life, and what we could name our new 0500 post. We now have two flags at The Jones. Gets me excited to have the option to double down, and if there are no attendees for the 0600 at least I’ve got a good run in and can get to work earlier than usual. One F just isn’t as fun without the other two.

Annie:
Hold plank and rotate one arm in a circular motion while holding plank with the opposite arm.

Flying sun gods sobriety style (AKA Nancy Kerrigans)
Lean torso forward, raise one leg out to the back, reach arms out to side and do small arm circles. Count in cadence just like sun gods. Forward on one leg, then switch legs and reverse.

set up cones in  a triangle and bears and blocks to each cone, 1,2,3 blockees at each cone, did this twice, it was fun, had to take another poop break so Mrs. Potts did a lap.

Announcements: There’s a new workout at The Jones starting at 0500, it’s called running. String Bean is leading the effort. We ran for 45 minutes with a poop break for DMT. So get out of your fart sack on Tuesdays and Thursdays for a double down at The Jones!

“Look after each other so that none of you will miss out on the special favor of God. Watch out that no bitter root of unbelief rises up among you, for whenever it springs up, many are corrupted by its poison.” (Hebrews 12:15)

Moleskin:
According to Merriam-Webster’s Collegiate Dictionary (11th Edition), the word “bitter” means: “exhibiting intense animosity; harshly reproachful; or marked by cynicism and rancor.” No wonder we are instructed to get rid of it. How can the fruits of the spirit live amongst such ugliness? Still, when bitterness wells up from our souls, it is tough to “put off”.

FNGs: None. Disclaimer still given.

We did our monthly fitness test, The Warrior. The PAX have 40 minutes to complete the following:

Here’s how to read the decimal scoring (each set of exercises adds one tenth):

FNGs: not any FNGs

Balls to the wall for 25 seconds
1 mile run

Raising Up the Rudis!

Moleskin: the weather was so perfect for this high rep workout. the extra laps around the track enabled us to get some 3rd F in as well. Lots of running events coming up to choose from too! Great Q today Hard Drive, looking forward to your next already.