Conditions: Warm/muggy, wet on the ground, but luckily didn’t rain during the BC.

The Thang:
The pax grab 2 blocks each and return to the circle.
-Lawnmower x10 each arm; Curls for the Girls x15; Calf Raises (w/ both blocks) x20; Farmer’s Carry around the circle…all OYO.
-Rinse & Repeat for about 10 minutes or so.
-Leave blocks at the circle, Indian run to the whiffle ball field, but took the long way going by the back scoreboard and using the wood boardwalk to get there.
-At ‘home plate’, do squats x20 & Monkey Humpers x20 (single count); then sprint to first base, side shuffle left to 2nd base, backpedal to 3rd base, side shuffle right to the plate…all OYO
-Rinse & Repeat for about 10 minutes or so.
-At home plate, LBCs x25 IC, tempo LBCs x25 IC, Reverse tempo LBCs x25 IC, flutter kicks x25 IC.
-Slow mosey to the small wall near the baseballs at the front of the park.
-Step ups x20 each leg OYO.
-Indian run back to the blocks, but looped around the parking lot by the fire station side of the park first before heading back.
-Overhead press x10; Bent Over Row x15 (or could substitute overhead tricep extensions); Chest press x20; run to the lightpost on the right and back…all OYO.
-Rinse & Repeat for about 5 minutes.
Stow Blocks

Moleskin: This workout was all over the place, working arms, then legs, then abs, the upper body again…it’s tough to fill an hour, so I just threw a bunch of stuff together.  Was nice to see a good turnout on a Saturday.

THANG: Mosey to block shed and meet in parking lot.

Devo:  Be intentional, do not defer if asked for your opinion.  Be the leader of your family, friends, coworkers are looking for.

Disclaimer: Not Given no new guys

The thing before the thang: Toto wasn’t feeling well. His throat was sore, and he was extremely congested. He never thought about not showing up. Remember your word means something. Not just in F3, not just at work, but in everything you do.

Sidenote: Cisco overslept, but he still came. Being late is bad, but not showing up at all is worse.

The exercises were swimmer push up and pull-up.
Sprints set of ten
6 recovery
6 Butterfly
6 recovery

Intro:  Earlier in the week, Goose dared the PAX to show-up at Seismic both Tuesday AND Thursday for a 1-2 kick in the nuts from back-to-back Q’s by Stalker and Goose. These boys ain’t scared – they showed-up 34 strong, and many of them donning a ruck for added suckitude. YHC wanted a heavy BC that pullups, blocks, and tires would surely deliver.

Disclaimer:  Given. 2 FNG’s. Welcome Shutterfly (formerly Obed Danjoint) – originally from Haiti, married with 2 kids, and a photographer, which explains his F3 name. Welcome Gosling (formerly Lucas Clark) – a 2014 Citadel grad, who is reporting for Marine Corps OCS on January 6. Gosling was EH’ed by Goose, which also explains his name.

Thang: Pair-up, grab a block each and 1 tire/team.

Derkins on tire x15, situps inside the tire x15.

Rinse and repeat 4 trips across the AO (each side twice).

With partner, situps inside the tire with block x15.

Parade coupons around the armory so that no coupon touches the ground.

Parade coupons around the armory so that no coupon touches the ground. Stow coupons.

We would all be better off if our “leaders” in government understood this concept.

Moleskin: During the requests for prayers, Muscadine related that his brother’s father-in-law had a heart attack, but fortunately the fire department was already on the scene fighting a wild fire. Always the educator and Fire Chief, Probie suggested that “you do not need to set a forest fire to get emergency personnel to respond. Just call 911 and we’ll come.”

Disclaimer: Not Given ( I will remember next time. No new guys)

For the last 10 minutes we played sharks and minnows.

Devo: No devo was given but here is some scripture for you now.

No discipline seems pleasant at the time, but painful. Later on, however, it produces a harvest of righteousness and peace for those who have been trained by it. Hebrews 12:11

Remember how we live matters. Our work ethic is important. It starts with the small things like making your bed, cleaning up after yourselves, exercising. All of these require discipline. I am thankful for this group for pushing me to do more for myself, my family and my community. Remember it will be unpleasant at times even painful, but if we persevere we reap a harvest like no other.

Conditions: Cool and a tad moist

-Run to railroad track and turn left; left on Cedar to Piggly Wiggly; left on W 4th St N back to Doty

-Run path in reverse for a total of about 2.4 miles

T-claps to all of the PAX for doubling down. Enjoyed “seeing the light”!

Conditions: 50 in most placed, but about 43 in the darkness of the Armory

Devo: It’s a busy time of year where every day can get packed with something. We think of it as a time for vacations, but really it’s not all too relaxing. Be aware of your spouse and give them time to relax. Don’t forget about yourself. Find time to relax. It does no one any good if either of you or both of you are drained.

Moleskin: YHC was pleasantly surprised by the turn out today. It’s nice to see a variety of men wake up and get the blood flowing. As YHC didn’t start with SSHs, and couldn’t remember the first exercise without looking at his weinke the BC started with some great mumble chatter. That and layers of clothes went away and the thang started. All good signs.

Quote of the Day:  so many 5 guys in my mouth references to count. It just slides out of your mouth when KY is around. Feel free to share your favorite in the comments. 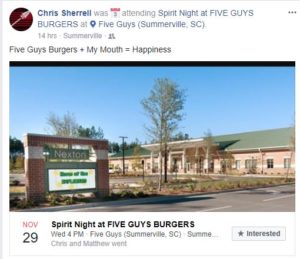 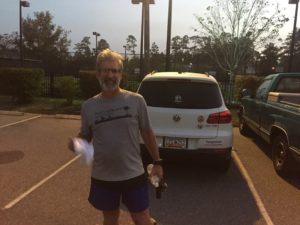 Jingles returned to the gloom after a long absence to give the men of Seismic a slow workout concentrating on form and stretching. It burned oh so good.

Run back to corner 1

Run back to AO

Moleskin – thanks for turning out for YHC’s first day back in awhile. Let’s make sure to be concentrating on form and get the guys stretched out to prevent injury.