Intro:  The Jones.  Tuesday.  Picture it, if you will.

COP:  (Called by Luigi, YHC has noticed this fellow has been very steady at the Jones and is ready to take the next steps into Q’ing.  Gotta get this fellow to Q school!)

Block Pile:  Overhead Presses and Incline-Blerkin 11’s.   TKO did this as the warmup last week at the ditch.  It sucked.  It sucked again today too.  Started off nice and easy, about half way through the burning begins.

Bring your block to the sideline and prepare for fun with a sandbag Dora run.

91 KettleBells with Block – Partner Runs to other sideline and back with sandbag on shoulder.

123 Block Dammits – Partner Runs to other sideline and back with sandbag on shoulder.  So many dammits!

43 Blockies – Partner Runs to other sideline and back with sandbag on shoulder.

The numeric progression was just me being a jerk.  Nothing more.

Final Station: Railroad Tie Run.  Line up with Partners on sideline, Partner runs out 5 paces, next PAX runs and leaps over planking pax and planks 5 paces farther down.  Repeat till you get to the other end.  Reverse course and do it again back to the original starting line.   Lots of sucky planking.  A little danger.   A little Tom Foolery from Hebejebe who elected to plank one step past Lotta Love in an effort to force YHC to leap over both of them.  “What the hell!?” but I didn’t play along.  Two dainty leaps to spoil the fun.

Pledge/Prayer/Devo:  Holidays can be a stressful time in many homes, for emotional and economical reasons. Every marriage has pain points, and for YHC and his M, conversations about budgeting where often a source of stress.  We learned that we had developed a pattern of communicating, then diverging away after a while, then repeating the cycle again.  Consistency and communication is the only way to change the pattern.  We had to learn to be consistent, to keep it from reaching these regular boiling points that would happen once or twice a year. 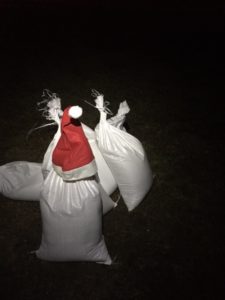 Sanda Claus He Came… To Town.

Intro:  YHC does not often recycle weinkes, but it’s hard to beat a block escalator, and it’s what the PAX do in between the block reps that can really ramp-up the suck factor. Three engineers and a pilot met in the dark to get better acquainted with the blocks and each other.

Disclaimer:  Nope. Probably should at The Jones everytime though, since they are relatively new.

Warmup: 1/4 mile jog around the track. Grab a block and cussack back to the track.

Thang: With the block escalator, the reps increased by 10 with each new set. After each set, the PAX did bear-merkins to the goal post (about 20 yards away), completed 1 pullup or 1 kip-up, then ran back to the blocks for the next set.

Cussack blocks back to the block pile.

Devo:  One of my go-to Bible verses, in life and at the AO, is 2Timothy 1:7. “The Spirit given to us by God does not make us timid, but gives us power, love and self discipline.”

Moleskin:  If F3 is a family, The Jones is our toddler. He’s finding his legs and is enthusiastic about learning new things, but he needs the attention and support of his bigger brothers. I enjoy getting to know these guys. Luigi seems to be the constant at The Jones, at least the few times that I have been there. He rides his bike to the AO as a warmup, will never be last in the movements, and is anticipating the arrival of Luigi, Jr. Continued prayers there, brother. Hebejebe is also an engineer. We did not get to discuss the origin of his F3 name, but this guy is the quiet grunt, grinding out each rep to the standard until it’s done. About what you’d expect from an engineer. LottaLove flys planes, is a musician, and has the potential to be the mumble-chatter guy at The Jones, with his laidback demeanor and easy conversation. For you big brothers in the F3 world who haven’t made the trek to The Jones yet, make the effort. Likewise, I would encourage you Jones boys to branch out to other AO’s, so that you can discover the bigger picture.