With work taking Goose out of state for a while, YHC felt it appropriate to honor Seismic’s original AO Q with three stations representing three memorable Goose Qs. Split the PAX into three groups and rotate stations.

Station 1: 100 Log Get-Ups Partner up and grab a log. Complete 10 Log Get-Ups and 10 Log Sit-Ups. Rinse and repeat until time to switch. This one is to honor one time I was paired with Goose and he was Qing. He had us do 10 rounds of 10 log Get-Ups and 10 Log Sit-Ups. We were the only pair that finished them all that day. I knew as soon as I was partnered with Goose that I was going to be doing all 100 of them.

Station 3: The Brick Run Half-mile run with two bricks. This was part of my second F3 bootcamp and my first Goose Q. The entire workout we had two bricks in our hand.

Devo: From Joshua 1. Goose has been a great leader for the region and the AO. This is one of my favorite passages for leadership in the Bible as God commands Joshua again and again to be “strong and courageous.”

Moleskin: The PAX showed up to tell Goose so long until next time. As work takes Goose away from us for several months, Jingles shared some thoughts about the man Goose is and the impact Goose has had on him. Goose has been a positive influence on many of us. I’m sure when he returns he will have a massive beat down in store for us. Until next time budy…

Intro: It had been a while since YHC was in the center at Seismic so I jumped at the opportunity when the Q sheet came out for November.  The workout was one YHC has been tinkering with at a few other AOs and finally felt it was ready for Seismic.  The TOTS did not disappoint.

Weather: High 50s/Low 60s but Probie and Cannoli came dressed for weather in the 30s

Discalimer: Given but no FNGs

Thang: Mosey to block pile (each PAX grab one block) reassemble at the entrance to Senior Center Parking Lot

The PAX will mosey back and forth to six locations around the AO while performing an exercise at each location.  The six locations and exercises were:

Devo: The Lord is my strength and my defense; he has become my salvation. He is my God, and I will praise him, my father’s God, and I will exalt him.  The LORD is a warrior; the LORD is his name. Exodus 15:2-3

Devo:  A word from Jonah chapter 4 regarding Jonah’s experience with  the plant that God grew to protect Jonah from the elements and then destroyed. To keep a long story short, we aren’t entitled to things. We aren’t entitled for things to go according our own plans and we can’t get angry when they don’t. God has a plan when things go differently from how we intended. Look to be in the center of that plan and be a part of it.

Moleskin:  The PAX didn’t disappoint YHC today. They brought their A-game and pushed through an upper-body focused work out. Nice job fellas. It was a pleasure!

Weather: 54 degrees and the Moon was out

The Chinook x 20 in cadence

The Hillbilly x 20 in cadence

The Thing Ring of Fire

2 curls for the girls

It had been too long since we ventured off campus, so we left it all behind. Like a bunch of Honey Badgers we just didn’t give a sh*t. We ran to Jingles Hill. We ran to the Concrete Beast. We ran down Main Street. We did exercises and an abbreviated version of the Concrete Beast Parade of Horribles. 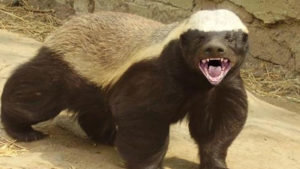 Like this guy, the men of the TOTS can’t be bothered.

Conditions: Hot and Humid. Are you surprised?

Line up and run, stopping along the way for a series of exercises to make sure our upper body, core and legs knew we still love them and hadn’t gone off and married our mistress Cardio. At The Beast we bear-crawled the flats of the garage and reverse bear-crawled up the ramps. At the bottoms and tops of the ramps we did 10 Carolina Dry Docks, 10 merkins and 20 squats. We did that for two (three?) flats and two (three?) ramps. Run up Main Street, turning at Mr. Ks. At the final corner, personal best pace to the flag. We met our old friend Mary there. She forced herself on us in a decidedly unladylike manner.

Devo: From Genesis 11 – The Tower of Babel

Moleskin: Large PAX today. A good showing for sure thanks to Muscadine doing a group EH. Of course, no Chill Cut routine is complete without a Tripod joke or two. A possible compliment to YHC occurred as we moved into Mary and one PAX commented “Is this an hour long?”. I guess time doesn’t fly when you’re having fun, or the we weren’t having fun. You be the judge.

Indian Run Around The AO

Count off into 2 teams. Grab a block.

First in line: 50 Curls for my wife

Team Block Pull Throughs: 1 down, 1 back

Announcements: Volunteers are need to help set up and break down the 2018 Big Obstacle Challenge @ Summers Corner.

Devo: Once you have found the peace that comes from a real relationship with Jesus Christ what do you do with it? Do you keep it to yourself or spread the word? If you were on a sinking ship with people drowning all around you, and another ship arrived. Once you are safely on board do you grab a deck chair and a drink, and think about how fortunate you are? Or do you start throwing out life preserves, and start trying to save everyone around you?

Conditions: Warm and humid but not quite as bad as usual

Mosey to block pile and get one block each

3 stations around Doty. Start at 25 merkins and 25 LBCs and descend by one rep per station. Run between each station. YHC led the group through the first loop of 25, 24, and 23 reps. The blocks were at the 2nd station and the merkins there were done on the blocks. At the start of each new loop, 5 burpees were required. After the first round, the Pax were OYO until time was called with about 5 minutes left. I believe the front runners were down to 6 reps when time was called.

Moleskin: YHC was DR on vacation last week and missed the monthly Shocker at the garage so decided to bring the Shocker to Seismic. Since we don’t have stairs at Doty, I made a couple of modifications to make sure it wasn’t too easy for the Seismic crew. As expected, this crew kicked ass and got better. Thanks for the opportunity to lead!

Conditions: 75 degrees and as humid as I can remember
FNGs: None

Mosey around the AO

Partner up and grab one block per duo. Head to the horseshoe pit for some Dora fun.
Execute the exercise cumulatively as a pair. While one man is doing the exercise, the other runs a lap around the horseshoe pit.
– 50 Block Swings
– 100 Derkins
– 200 Step-Ups
– 300 Squats with the block

Audible called about 50 Squats in. YHC advised the PAX its ok to use a combo of Overhead Presses and Squats until 300 is reached.

Devo: Scripture from Exodus 19. God reminds the Israelites of what He has done for them, His love for them, and future He desires from them before He delivers the Ten Commandments in chapter 20.
This speaks to the leadership principle of touching hearts before asking for hands. Let your relationship buy you influence in the lives of those you seek to lead.

Moleskin: The humidity was noteworthy today. The humidity is always horrible here in August, but after two straight weeks of rain, everything in Summerville is a bog and the air was heavy out there today. The PAX hung tough though and gave it all they had. YHC learned that 200 Step-Ups take a lot of time and 300 Squats immediately following 200 Step-Ups is not ideal.

Introduction: It has been a hot minute since YHC has been to Seismic. Obviously the only way to stage a triumphant return was to pick up a Q and bring a righteous beatdown.  It was awesome to see a ton of new faces along with the familiar ones.  Oddly enough, the mumble chatter was extremely low.  Especially since the Seismic Pax is usually lively.

YHC wanted to approach this Q a bit differently than others in the past and brought out some long holds.  Looking back, this may have shut down the mumble chatter early.

Regardless, fun times were had by all.

FNGs: none, disclaimer given

Grab two bricks and 1 block and return to the flag

To the sand pits, line up across from each other

Lap around AO, ruckers up front

Back to the flag

Getting humble is counter-intuitive, and it moves against prevailing culture. You see, we men want to feel successful, important—and have others consider us so. Culture trains us, therefore, to promote ourselves; to be strategic with our time and attention; to let positions determine our treatment of others. This training is foolish. It misses the sense and strength of humbleness.

Imagine someone humble. They’re often fearless, able to act on convictions, rather than trying to impress. Their decision-making is often sound, unclouded by insecurity or prejudice. They listen and welcome honest differences. They abide critics, crushed not by their criticism. They’re often magnetic, treating all people with respect. They engender loyalty, camaraderie. King Solomon wrote, “with the humble is wisdom” (Proverbs 11:2). We want to work with humble people. We want to work for them and have them work for us. We want them as spouses, friends. But, mostly, we should want to get humble ourselves.

Practice getting humble. Choose something this week: initiate a conversation and listen more than you talk; serve in a way that’s mundane or difficult (unpleasant, even); help someone anonymously; give someone the credit they deserve (even if you deserve some too).