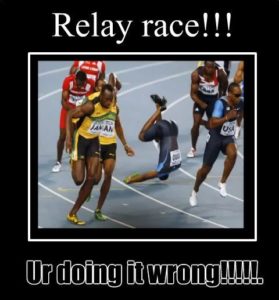 We were better than this. Slightly better.

Count off by 1s and 2s to create two teams, and let the games begin!

Relay 1: Each PAX from each team bear crawls 25 yards and back, one at a time. Next PAX goes when first PAX gets back. You know, like a relay. Hold low plank before it’s your turn to crawl, high plank on return. Team 1 won this round.

Relay 2: Crab walk down, reverse crab walk back. High/low plank like before. Dead-on-balls tie between the two teams.

Relay 3: Broad jump down and back. Hold Al Gore before and after your turn. Team 2 wins.

Relay 5: Sprint down and back, stopping at far end for 5 burpees. Team 1 wins.

Intro:  YHC likes to bring a fresh beatdown whenever he Q’s, but that gets to be a challenge after nearly 100 Q’s. Sometimes it helps to build the workout around a central theme. One theme that all PAX can relate to is being to dang busy and the need to multitask, which BTW is complete BS. You may have multiple items on your plate, but you can only effectively complete one task at a time. To drive the point home, every exercise will be a mash-up of two exercises, completed together. The result was some interesting combinations.

Disclaimer:  One FNG received his own disclaimer. The PAX received the typical “scale, modify, replace” disclaimer.

Thang:  Pair-up with a battle buddy, grab one block each, and reassemble at the dead end road. YHC will grab a block and a log for a round of Usain Bolt Log Carries. Each duo will select an exercise for the PAX to perform, while the duo carries the log 50-75 yards out and back. Eight rounds of exercises included: blockees, block merkins, American hammer w/ block, curls, Cussack, something, something else, and bear crawl with block.

Mary:  Continuing with Usain Bolt, each duo will select a core exercise for the PAX, while the duo completes 20 pullups under the table. Eight rounds of core exercises included: X’s & O’s, flutter kicks, WW1 situps, big boy situps, Freddie Mercurys, something, something else, American Hammers.

Devo:  Keeping with the theme, Luke 10:38-42, tells the story of Jesus and His disciples traveling and being invited to stay at the home of Martha and her sister Mary. While Martha rushed around the house, frantically catering to her guests, Mary sat at Jesus’ feet listening to Him preach. After some time, Martha asked Jesus to make Mary help her with food preparations and chores. Jesus told Martha that Mary was already doing the most important thing – the only important thing. With modern technology, we are constantly bombarded with information and issues that appear to need an immediate resolution. Sometimes we need to take a step back, prioritize, and do only the most important thing.

Partner up and grab one block per pair and head back to the flag. Execute the cumulative total of exercises with your partner. While one PAX does the exercise, the other runs around the farm house. For the first two exercises, the running PAX is also carrying the block.

Line up for Usain Bolt which included Burpees, LBACs, Carolina Dry Docks, and Bear Crawls to name a few.

Blocks back to the  pile and circle up for Mary.

Devo:  Proverbs 31:30 – “Charm is deceptive and beauty is fleeting, but a woman who fears the Lord will be praised.”

YHC is blessed with a Proverbs 31 wife. Many of us  are. Be sure to let your wife know how much you appreciate her today. Our wives do so much for us on a daily basis. Don’t take it for granted!

Moleskin:  Every time YHC thinks a Dora will be an easy workout, it doesn’t pan out that way. The squats seemed to be never ending, but we pushed through. It was great to meet Hot Tub and Home Alone for the first time, and it’s always good to be with brothers in the gloom.

16 men joined YHC for a trip around the AO. Temperature was in the mid 60s and very pleasant.

THANG – Body Builder Challenge starting at 7 with each minute starting a new round and increasing number by 1. When no longer able to complete the reps with proper form, you are eliminated. Bear crawl to street and form up for Indian Run. Once the glow stick reaches you, sprint to the front. Stop along the way (all exercises done in cadence or on Q), WW1 sit-ups x 20, jump squats x 20, Hand release Merkins x 20, run, monkey humpers x 20, seal jacks x 20, American Hammers x 20, run, Flutter kicks x 10, Body Builders x 10, run. Anytime when awaiting the 6 or otherwise not engaged; SSH.

Mary – Up downs (no it is not abs, but is total body and sucks)

Deuteronomy 5:16 Honour thy father and thy mother, as the LORD thy God hath commanded thee; that thy days may be prolonged, and that it may go well with thee, in the land which the LORD thy God giveth thee.

Moleskin – Huge welcome to FNG Rosco (Todd Vieau). Goal for the BC was pretty simple; GET IT UP AND KEEP IT UP (heart rate that is). A no burpee guarantee was mentioned in the pre blast, but the Pax made up for it with Body Builders. The Body Builder challenge is always a fan pleaser to start any BC and a run through the AO gets some Pax out of their comfort zone. Things were going well until reaching the first stop along the run and about 3 Pax showed up mid exercise. Who had the 6??? Corrective action taken, we recovered and pressed on. In keeping with the devotion, all men were challenged to reach out to the persons that raised them today and let them know they are appreciated and they are cared for. All the men present pushed hard and made themselves better today. Welcome back to the gloom Cheech and Test Tube. Proud to Lead, Maj Dad

Moleskin: 10 PAX joined Sprinkles and YHC for a little Bacon and Eggs this morning.

The Thang:
Mosey around the AO to the block pile. Get a Block and muster back at the Flag
Perform Bacon:
5 – Burpees On Q
10 (IC)- Amercian Hammers
15 (IC) – Curls for the Girls
20 – Overhead Presses on Q
25- Nose breakers (On your back, block tricep extentions over your face) ON Q

Stow Blocks and Muster at the COP

Naked Moleskin:
Welcome back into the gloom Woody, who has been gone for a few weeks now. Also T-Claps to Home Alone who has posted 3 BCs in a row since joining us last Saturday.

YHC wanted to bring a theme to his Tectonic VQ and decided to honor one of the best baseball personalities Bob Eucker by showing some love to the cellar dwellers of each Major League baseball division.

The PAX moseyed to get one block and returned to flag.  Count off by two to form teams. The teams will complete each set of excesses on their own then run around farmhouse back to flag.  Team cannot leave until all team members have finished both exercises. Team that loses each round (Salute) will be penalized.

Devo: Joshua 1:9 – Have I not commanded you? Be strong and courageous. Do not be afraid; do not be discouraged, for the Lord your God will be with you wherever you go.