Besides the first lap and the 8th or 9th being Indian runs, all 12 laps (3 miles) were OYO or one PAX would pace the group. Faster PAX would plank until 6 was in. Then we lifted things and put them down and other fun stuff in between laps:

We were running out of time so Q calls audible, instead of doing a bear crawl suicide our last lap would begin with a 20m(ish) bear crawl followed by the infamous Sakrete Shuffle. RECOVER RECOVER. Stow blocks and circle up.

Proverbs 16:9 – “the mind of man plans his ways, but the Lord directs his steps” – We can plan all we want to, but no amount of planning will keep you from controlling the uncontrollable.

Thank you Sakrete for leading us in prayer.

This was DMT’s first Saturday Q ever, to top it off was the most PAX DMT has had the pleasure of leading in a workout. The laps provided for a good amount of mumble chatter along with the planking waiting for our 6. Everyone gave a great push and made the 3 mile mark for running, and all exercises were done with minimal groaning 🙂

A few men raised up and asked for prayer requests/thoughts/good vibes – They will remain nameless, but all nine men there know who they are. Here’s to hoping you all are able to deal with your challenges/daemons/goals and will come out on top a better man no matter how long it takes to complete. 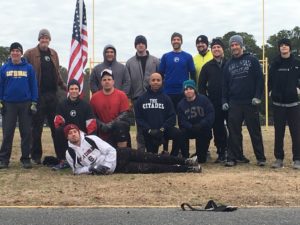 FNGs: None, but disclaimer given nonetheless: I’m not a professional, you could hurt yourself, you know your body better than anyone else, so be careful and modify as needed. Can’t sue F3.

Devo: America is a choking hazard. We have to remember that we are third.

I called this workout “Good Morning ‘Merica” since we did lots of good mornings, merkins, American hammers, Native American runs (Indian runs) – you name it, we did it. Lots of ‘Merica. I thought it could tie in well with the devo.

We are really blessed to live in America. We have lots of peace and material prosperity. It is a good thing, but I’ve heard someone say it can also be a “spiritual choking hazard.” I thought this passage from the book of Matthew was interesting, notice the four situations it talks about, and what it says about spiritual choking:

Of course, that story is pretty cryptic, so Jesus’s close followers asked him to explain it, and later on he told them,

I think that part of the hazard is when we have money saved up and plenty of insurance in place, we feel like we’re in control of our lives and we can do things the way we want to. We don’t really need God. We are independent. But really that’s just an illusion – ask Picasso, even our ability to wake up in the morning is a daily gift from God, and if we think that we are independent and can call all the shots, we’re deceiving ourselves.

So to fight the choking hazard, we need to remind ourselves: I am third. God first, others second, me third.

Coffeeteria at The Orange Spot 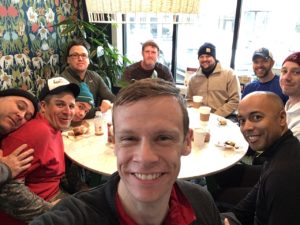