Each PAX grabs two blocks and gets with a Battle Buddy for Usain Bolt. First set of Battle Buddies, call out an exercise for PAX while they Farmer’s Carry blocks around parking lot. PAX enjoyed classic tunes during the exercise. 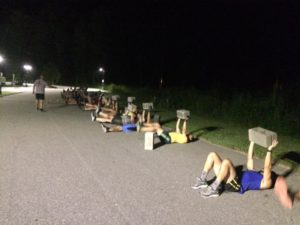 Moleskin:   Lots of mumble chatter this am, especially when the first Battle Buddy group (Speedo & Magic Mike) had the PAX do blockees while they took their sweet time farmer’s carrying their blocks around the parking lot. PAX enjoyed classic tunes on the bluetooth speaker. As YHC realized we would run out of time, two battle buddy groups starting farmer’s carrying. For the final turn, all groups who hadn’t gone twice, farmer’s carried while the remainder performed the exercise.

Overheard during the workout- names withheld to protect the guilty:

Never a dull moment at Bedrock.

(Inserted photo shows Fish n Chips avoiding flutter kicks while critiquing form. Someone give that man a clip board)